Nigerian singer, Davido has reacted to the video of S.Africa singer, Babes Wodumo being physically assaulted by boyfriend, DJ, Mampintsha on Instagram live.

The video which has since being deleted by Wodumo, has gone viral on social media with many people condemning the DJ and urging Wodumo to leave him before it is too late.

Among the people that criticized the DJ, is singer Davido, who expressed his displeasure on seeing the video.

In his reaction, the Nigerian star said the video made him so sad.

He took to his Insta-story and wrote:

“That Babes Wodumo video made me so sad.” 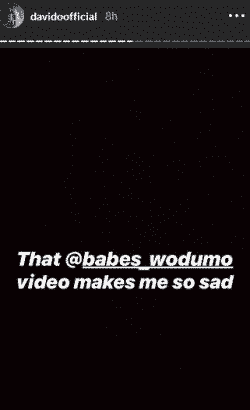 Oyedepo finally breaks silence on the Presidential Election in Nigeria