Human rights activist, Deji Adeyanju, has resigned from the ‘Our Mumu Don Do’ coalition, alleging that his partner, Charles Oputa, aka Charly Boy, betrayed him and their cause while he was locked up for 78 days in prison.

Announcing his resignation on Wednesday afternoon, Adeyanju tweeted, “Dear Nigerians, I have resigned my membership of Our Mumu Don Do. I no longer have confidence in the leader of the movement, Charly Boy. He betrayed the cause while I was away in prison and compromised with the oppressors. Thank you.”

Adeyanju and Charly Boy organised scores of protests against the Buhari government between 2016 and 2018 including one at the Wuse Market, Abuja in which they were almost lynched by Buhari supporters.

He also led a protest at the National Assembly on the day operatives of the Department of State Services laid siege to the Assembly. Adeyanju has been arrested over five times within the same period having been accused of murder and other offences many believed were trumped up. 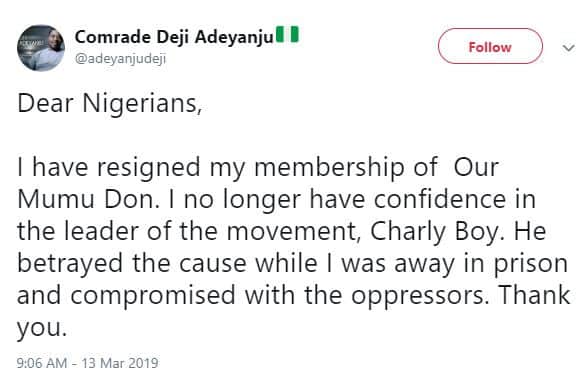 (Visited 3 times, 1 visits today)
As He Resigns From ‘Our Mumu Don Do’ Coalition, Charly Boy Betrayed Us And Compromised With Our Oppressor’ – Deji Adeyanju Says
0 Like
1 min read
133 Views
Previous post

Many killed as trailer loses control in Anambra (Photos/video)