Residents of Umuobioma in Ozara, Oru West Local Government Area of Imo State are yet to overcome the unsavory scenarios which played out in their hitherto serene hamlet recently.

Following the death of one of their illustrious sons, Late Chief Mathew Ugwumba, several guests, made up of friends and relatives had assembled from far and near, preparatory to giving Mathew Ugwumba, a befitting burial, most deserving of his status in the community. Assorted dishes had been prepared.

Wines-local and foreign- had been bought and cooled, while different performance groups had been engaged; everyone was indeed looking forward to the glorious end of Chief Ugwumba’s journey in life as he gets lowered to his grave, having lasted up to 94 years, in a country where life expectancy still hovers around 49.

But this was not to be.

As the preparations were in top gear, the corpse was laid on a beautiful bed under a decorated canopy, waiting for the priest to conduct necessary rites for the burial.

Suddenly, a team of armed police personnel, who came from the Mgbidi Police Division, drove into the venue of the burial, alighted one after the other from their van and invaded the village.

There was serious confusion everywhere as the scene looked like a Nollywood movie. It was later learnt that the men in uniform had come to enforce a court order, restraining the burial from taking place. Some of those engaged for cooking and few youths who had been engulfed with the fun of the burial procession took to their heels, gathering at a distance to watch the rest of the movie.

Before guests and family members could begin to ask questions, Olivia Ugwumba, Late Ugwumba’s second wife and some other members of the Umuobioma hamlet were whisked away. This instantly threw spanners in the wheel of progress as far as the burial rites were concerned, exposing the entire village to a somewhat embarrassing situation. Late Ugwumba, who died on September 26, 2018 and had been prepared for burial was returned back to Demion Hospital Mortuary, Orlu, Imo State. 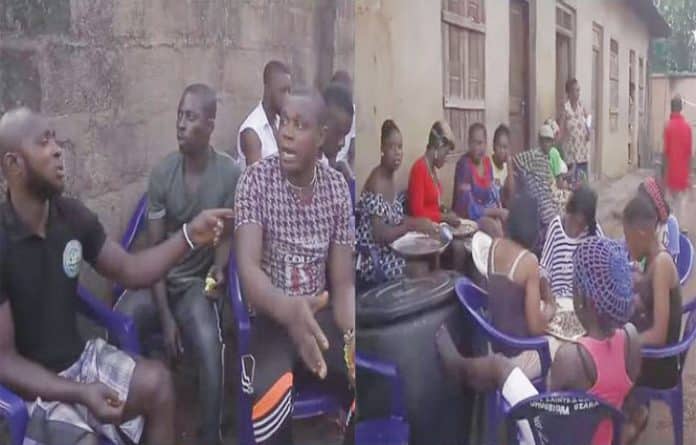 Revelations showed that the bone of contention was a court injunction, obtained by Julius Ugwumba, one of the sons of the deceased Mathew Ugwumba’s first wife (plaintiff), praying that his father should not be buried!

According to the suit with number: HOW/652/2019, the court order reads: ‘The Motion Exparte filed on 15/4/2019 praying for interim injunction restraining the Defendants from continuing with any arrangement for or concerning the burial of Pa Mathew Ugwumba, the alleged testator of the will dated 13th November 2017, pending the determination of the interlocutory injunction filed in this suit.

And after the hearing, K.A Nwakuche with Nkem Oputa of counsel for the Plaintiffs/Applicants, it is hereby, ordered that the Defendants be and are hereby in the interim restrained from continuing with any arrangements for or concerning the burial of Late Pa Mathew Ugwumba of Ozara, Oru West LGA or carry out the burial on 3rd May, 2019 or any other date pending the determination filed on 15th April, 2019.”

For many people in the community, the incident came as a rude shock, because so many consultations and peace parleys had been orchestrated prior to this period towards making sure that the deceased gets the rest he may have been yearning for as a living man.

According to the Chairman of the Community Development Association (CDA), Edmund Obodo Ebeloma, the lingering crisis which precipitated all these shameful developments were unnecessary as every effort had been previously made to forestall any problems.

He says: “This whole ugly development is unnecessary. The man in question, Mathew Ugwumba, was like a big uncle to all of us. We had agreed, as members of the same kindred that everyone should sheathe his sword and carry out this burial, which every one of us is responsible for and had been levied. Before this whole arrangement started, one of Mathew’s sons, named Julius had agreed that everything was okay. In fact, they invited all of us to the Parish Priest, who wanted to know if everything was alright before allotting a date to us for the burial. We had wanted the burial to take place on the 26th of April.

“This date however coincided with the burial of another prominent son of this town, which forced us to shift ours to May 3, because the other group got the date before us. The preparations were in top gear, and nobody was expecting any disruptions. But Philip, the second son and his brothers, fully aware of the entire plans, went to get an injunction to stop the whole process. And his reasons are rather amusing. He said one of his sisters, named Adaobi was not duly consulted; which is not true because some people went to inform her husband’s people of the burial plans. When Philip noticed that the excuse was not working, he came up with another reason that our kindred ostracised them.

“Again, that is false, because he voluntarily decided to leave Egbudike kindred and align with Umuonuoha kindred. You can imagine the embarrassment this is causing after guests have been invited and on getting here, the story becomes something else. If their problem is their father’s will, it is misplaced, because the man in question did not own any building in choice locations like Abuja, Onitsha or Lagos, that could be causing this kind of uproar. In fact, I am disappointed in this whole matter. So many innocent people have been detained over this lingering issue.”

Explaining further, Benedict Ugwumba, one of the relatives, confirmed that a piece of land was at the centre of this whole problem, which only recently culminated in the injunction, restraining the 94 year-old man from being buried according to Igbo custom. According to him, one of Pa Ugwumba’s sons, Anayo has been in detention since 31st December, 2017 on the accusation of murder.

“This matter should serve as a lesson to others. A piece of land which John wants is at the centre of this whole problem. Late Mathew has made it known that he did not give the land to him. In fact, as I speak with you, two of the step brothers had a fight over this in 2017, and the result has been a subject of controversy.

“One of them who died afterwards from other issues was said to have been killed by Anayo, despite the fact that the autopsy did not reveal so. And since 31st December, 2017, Anayo, who is being accused of that death, has been in detention. His brothers are spoiling for war to avenge that death, including stopping the burial plans of his father.”

As the order restraining the burial subsists, the hearing which was supposed to come up on May 15th 2019, could not hold due to some technical issues, and the implication is obvious: Late Pa Mathew Ugwumba’s spirit will still be hovering restlessly.